Our sustainability group moved on last year from focus on our carbon footprint to our plastic footprint when they found some of the terrible facts about plastic. By 2050, at the current rate of progress, there will be more plastic by weight in the oceans than fish; one million plastic bottles produced every minute round the world being two such mind boggling numbers.

The world (or at least the UK and Europe) does also appear to be waking up to the problem, mostly courtesy of Sir David Attenborough’s “Blue Planet II”. My admiration for him is only increased by how the series highlighted environmental issues.

Our sustainability team has already made a dent in plastic use at Middleton Hall. Nothing to change the world but we all have to start somewhere. We now get our (organic) milk delivered in bulk and distributed by jugs, and the milk containers sold in the Orangery are good old fashioned returnable glass bottles. Well done Acorn Dairy for helping reduce our plastic containers by 500 a month.

We have also held screenings of the excellent documentary “Plastic Ocean” in the Vision Room over the last couple of weeks. Some residents and staff emerged appropriately shocked at the latest human endeavour to mess up our planet. “Dreadful” said one resident “and I am certainly never eating mussels again”.   I am not qualified to advise on how safe fish are to eat now, but it has certainly made me think again.

Another excellent initiative from our sustainability group was to organise a voluntary litter pick. I was slightly sceptical that picking up litter along 300 metres of the country lane that leads to Middleton Hall would need an entire group. How wrong I was. 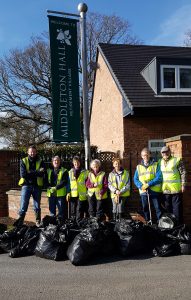 I was genuinely shocked. All that in 300m of a low usage country road with no footpath. The UK has around 245,000 miles of roads. If our small road was just average, so that would be 28 million bags of litter sitting by our roads, if my O level maths is right. And I suspect that, as a high proportion of cars going along the road leading to the main Middleton Hall entrance are visitors and residents (and I cannot believe our customers would be lobbing empty cans of Carling out of their windows), our road might actually be below average.

…according to the wise women of our Current Affairs Discussion Group last week, is to have all schools do a voluntary litter pick in a suitable location at least once a year and do their own maths on their findings. Some real education. (Credit to Dr Mani Mehta, Mrs Verna White, Mrs Ninette Mate, Mrs Sheila McGinn).