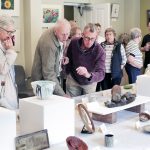 Our first ever arts festival has been hailed as a great success. Created and run mostly by residents the festival featured over 100 displayed artefacts including ceramics, jewellery, photographs, painting and drawings clearly illustrating the depth and breadth of creativity within the Village.

The Arts Festival was not only a magnificent display of talent, but it bought communities together and unveiled some fascinating stories, memories and emotions. 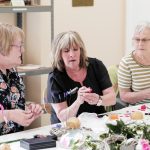 The workshops proved popular too, with some residents taking part in arts and crafts for the first time with everyone benefitting from the therapy of producing something creative. Such is the power of Art. 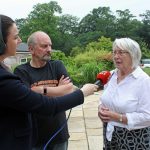 A highlight for many was the dramatic pit firing of over 50 clay pots, a method dating back over 30,000 years. This event organised by Les Simpson was coupled with a great get together at a festival BBQ. Joan Hardie, Editor of the Northern Potters Association newsletter commented “A most impressive undertaking that has completely changed my view of retirement villages!” 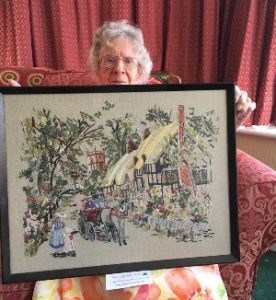 Lovely stories were also uncovered. Ruby Barham displayed a fascinating embroidery. She worked on this in WW2 but was unable to finish it as she ran out of silks and these were no longer available. American soldiers based at her village, Stone-cum-Ebony in Kent, admired her craft work and had new silks sent over from US so she could finish it! 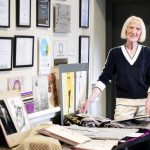 Alongside all the fabulous art exhibits, we were also grateful to Mary Burgoyne who shared a small collection of her fashion sketches and designs. A key London fashion designer in the 60’s, Mary designed outfits for many A-List celebrities. One, a silver knitted mini dress for Anita Harris was on display.

We’re already receiving calls for this to be an annual event, so like the Village show in September, it looks like it will definitely become another regular feature in the village’s calendar. 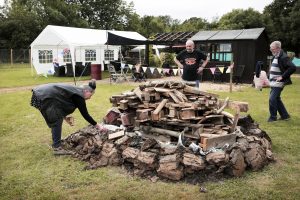 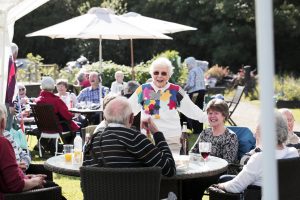