Ahead of this summer’s Tokyo 2020 Olympic and Paralympic Games, a resident of Middleton Hall has been reflecting on a distinguished career in TV sports broadcasting.

Duncan MacEwan, age 95, who retired as the BBC’s Operations and Engineering Controller in 1984, oversaw the TV broadcasts of every Summer and Winter Olympic games from the 1950s to the 1980s.

International television coverage of the Olympic Games was first broadcast in 1956.Duncan recalls visiting every location ahead of each event throughout his career.

“It was vital to get everything right for the broadcasts so I went on a pre-tour to check all the technicalities were in place.

“I was especially pleased that I did this at one of the games when I discovered that no-one had booked any cameras for the film crews which I had told them they must expect!”

Duncan, who moved to live at Middleton Hall Retirement Village in 2019, is also very proud to have been responsible for bringing golf to TV screens in the UK.

In 1954, when television had only just started transmitting beyond the South East of England, Duncan instigated the first live coverage of the famous Welsh golfer Dai Rees practising live on air. 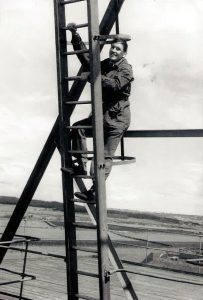 “This little item seemed to please golfers all over the country,” Duncan added. “Fired with our modest success we suggested to the BBC’s Head of Television Outside Broadcasts, Peter Dimmock, that we could televise the 1955 Walker Cup at St. Andrews, the biennial match between leading amateur golfers from the US, Great Britain and Ireland.

“Providing hours of lovely free TV programming over two days at a time when the network was normally ‘asleep’, seemed a tempting proposition: there was of course no regular daytime television in 1955.

“Peter was a dynamic and highly competent production man with a wartime flying background and was very much sport-orientated. He went on to become presenter of Sportsview and Grandstand and the idea appealed to him. He said ‘Just hire me a “chopper” Duncan’ and he came up to visit the site.

Duncan’s next hurdle was to convince Brigadier Brickman, the then Secretary of the oldest and most prestigious golf club in the world, the Royal and Ancient Golf Club of St Andrews (the R&A), of the need to run cables along the course that would have to be placed underground.

“I must say the Brigadier didn’t blanch and took it well and I was then charged with walking the course with the Head Greenkeeper to agree what might be done without any desecration of the ‘holy ground’.

“In addition I was present for every yard of the trench that was dug, various large cables being quietly dropped in as we went. Worse was to follow when we would have to locate a potentially disruptive noisy power generator along the course but thankfully we managed to site it into a bank. Happily there were no complaints during the practice rounds so we were allowed to successfully complete our intricate task.”

Duncan’s experience of the occasion was also notable for another reason:

“It was my first encounter with the great Henry Longhurst, who was the BBC’s commentator for the event. I met him and climbed the camera scaffolding tower ahead of him. When I put his haversack down I couldn’t help but notice an unopened bottle of whisky peeping out!

“Henry did a first class job throughout the two days. When I returned to see him back down after the first day, I picked up the empty bottle from the floor of the commentary box and noted what good taste he had in single malts.”

Coverage of the oldest and most prestigious golf tournament in the world, The Open at St. Andrews followed in July 1955 using the same technology. 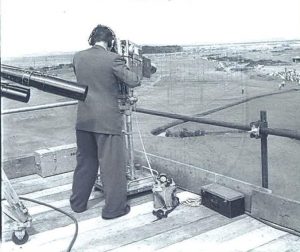 “This led the way to regular full-scale coverage of golf tournaments on British television, with interest growing year by year. The rest is history,” added Duncan.

“Golf is now so popular on television that producers have access to a multitude of facilities.  It was by no means like that 65 years ago when television was black and white, there was only one channel and we had no way of video recording play. Furthermore, the three cameras we had required careful handling as they weighed some 45 kilos each!”

Duncan faced an unusual challenge during the filming of the 1956 Canada Cup golf tournament at Wentworth.

“I noticed that the picture from one of the camera towers was shaking and spotted that there were a couple of chaps seated on a plinth just below the cameras at the top and one was swinging his legs over the side, 70 feet up.

“I hastily ascended the metal ladder to the camera position only to find that the two offenders were the BBC’s own Director General, Lt. General Sir Ian Jacob and his guest, none other than Group Captain Douglas Bader, the ace Second World War pilot. Upon my arrival I am pleased to say that the Director General’s leg-swinging stopped immediately!

Duncan still enjoys watching golf on television in his suite at Middleton Hall and has very fond memories of his time at the other side of the screen, which also included overseeing the outside broadcasts of several royal weddings.

“It was an awful lot of fun and I wouldn’t have changed my career for anything. I was very fortunate to have worked with such good, dedicated people around me, who shared the same level of BBC commitment to the ever-growing golfing and viewing public.

“But even more importantly, outside work I had the backing and support of my wonderful wife who gave me our four lovely daughters.” 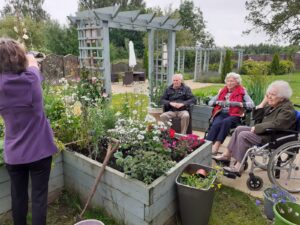 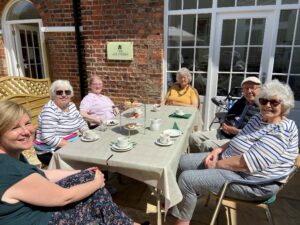 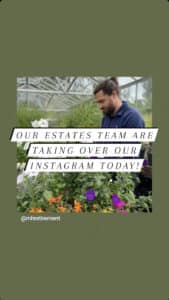