After six years of living in one of Middleton Hall’s award-winning carbon neutral properties, Waterside residents David and June wouldn’t chose to live anywhere else.

The couple’s move in 2014 came at a time when they were considering downsizing from their 1930s detached property in Darlington.

June explained: “We were visiting Middleton Hall regularly to see David’s mother and I always said that I’d love to live somewhere like this when the time came for us to move.”

The couple put their names down for a property in a future phase of the Waterside development of eco-friendly homes but then decided to snap up one when it became available earlier than they expected. 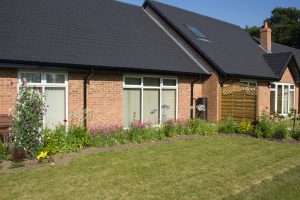 “We’d lived in our home for over 30 years by then, so rather than spend money on maintaining it we decided to move instead,” added David.

As only the second people to move into the development, the couple have subsequently become trailblazers for a greener way of living.

“The property is very efficient to run,” said David. “It is carbon neutral and our solar power tariff means that we make more on our energy costs than we are paying out.

“We were early adopters of solar power so we are on a good tariff which means that the energy we sell back into the grid more than covers our costs.”

A log burner keeps the triple-glazed property very cosy without the need for the heating to be switched on too often and the weather forecast has taken on a new significance for the couple.

“If it’s sunny we make the most of the electricity we’re generating” June said. “A sunny day in October meant that I got ahead with all my Christmas baking!”

The spaciousness of the couple’s dormer bungalow also suited the couple.

“We wanted a smaller property without losing bedrooms as we have regular visits from family who live in the Midlands,” David added.

As keen gardeners they have created a garden at the back of their property which looks out over a countryside scene of fields and trees and they also have one of the community allotments in Middleton Hall’s grounds. 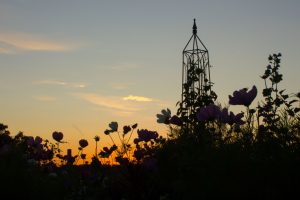 Sunset at the Waterside (Image taken by David Gaskell)

The couple maintain a very active social life without having to stray too far from their home which includes table tennis, bowling, art appreciation, pottery classes, a photography group, singing with the choir and trips with the Middleton Hall walking group. 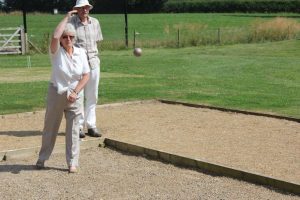 David and June playing a game of bowls

“There’s an amazing community here and we have some lovely friends around us at the Waterside,” reflected David. “Everybody is so helpful and supportive and everything is on the doorstep – it’s great.”